CVASP Had Everything I Look For in a Seminar

The Central Virginia Sports Performance Seminar was an outstanding event and the highlight of my summer. I really enjoyed this seminar because it was like a buffet of the aspects I enjoyed from all of the other seminars I’ve attended. CVASP had the higher-level, scientific approach to training that you’d see at the SWIS Symposium, ways to apply the methods like the Speed and Power Summit and it was strictly for sports performance coaches, just like the EliteFTS Sports Performance Summit and PLAE Summit.

If I had to make a rough estimate, I’d say 85% of the coaches in attendance worked at the collegiate level or higher. Those who didn’t work in a team setting worked at well-established performance centers. Whatever the number may be, the moral of the story is I was surrounded by some serious coaches. It was a motivating atmosphere to be around. I got to be a fly on the wall for two nights and join some small groups to listen to these people discuss the intricacies of training.

When I look at where I am in my career, it’s crazy to think of the people and the topics of conversation I got to listen in on. Some of those people included Dr. Bryan Mann, Yosef Johnson, Jeff Moyer, Keenan Robinson, Matt Thome, Bret Bartholomew, Jay DeMayo and Coach Kav, among others. I got to hear these guys share stories and talk about the principles of Dr. Yuri Verkhoshansky, Dr. Michael Yessis, Dr. Mel Siff and Dr. Anatoly Bondarchuk. You don’t hear those names thrown around too often, but it shows the level of coaches I was surrounded by. The social was a nice, relaxed setting outdoors with the barbecue grilling all night and, for me, was a unique mixture of taking mental notes for all the knowledge that was being shared and hanging out with friends.

One night of that is more than enough, but I got to do it for two. I thought that was a great idea and goes back 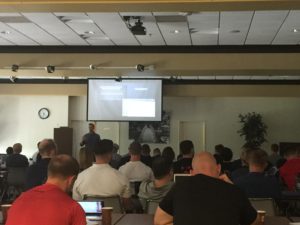 to what I’ve learned from all of these seminars I’ve attended: these events are only as good as the person running the show behind the scenes. Jay DeMayo, the head strength and conditioning coach at Richmond, did an outstanding job putting this together and making it a hub where the best and brightest in the field gather to share ideas and get better.

Jay’s CVASP podcast is one of my go-to listens in the car because of how in-depth he goes into sports science and training with his guests and all of the top trainers he “introduces” me to. This seminar felt like an in-person extension of his podcast. I have to admit, some of the information being shared I didn’t fully grasp because I’m not at the level these other coaches are at. What I learned from the seminar will be much different than what others with more experience took away.  Even though some parts might have went out my head, I still left there a much better coach.

What I took away from the seminar could be broken down into two parts: one being what I learned, the other being the experience of being there. Part of the experience I already described with the company I was around during the social. In regards to the presentations, I got the chance to listen to Doug McKenney, who was the first full-time NHL S & C coach and been in the league for 30 years, and Keenan Robinson, who is the U.S. National Team’s High Performance Director and has trained Olympic swimmers. Going back to what I mentioned earlier, just to be in the presence of these people is an experience within itself. I might not grasp everything that’s being said or be able to apply every bit of information, but it’s unbelievable to be able to sit back and here the best in the world talk about complex topics.

“If you know where you are, where you’re going and how to get there, you can get there.”

My knowledge of Yessis’s 1×20 system is minimal, but I was able to get a glimpse of its application in the collegiate setting through Matt Thome of Michigan Tech. He stressed the importance of quality of training and using the minimal effective dose. Another topic that I’ve seen pop up is velocity based training and CVASP brought in the go-to person to speak on it in Dr. Bryan Mann. Mann broke it down simply, gave you ways to incorporate it for other exercises outside of the “big three” and explained what to do if you don’t have access to all of the new software. The quote above, where he compares how we used to use maps to get to our destination before GPS, perfectly states what to do if you don’t have any of the gadgets to use.

Through my experiences with Kav and reading Conscious Coaching, I’ve learned that bad traits can be used for good in coaching. In terms of the art of coaching, it’s been the most eye-opening thing I’ve learned. Having heard Brett Bartholomew speak before, I was glad he chose “The Upside to Your Darkside” as his topic for CVASP. It’s the area of his book I’ve found to be the most interesting and one I’ve tried to apply slowly into my own coaching. 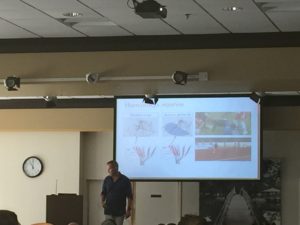 The area I feel I’m the weakest in, but left CVASP more confident about, was teaching sprinting. Hakan Andersson and Dr. Brad DeWeese really helped me get a better understanding on how to teach sprinting better. These guys showed specific exercises to develop speed and DeWeese explained how certain Olympic lifts at specific percentages positively effect different aspects of sprinting. What made their presentations so useful to me was how they showed footage and looped it multiple times of top level sprinters running while they talked. This allowed me to see things like how high on their toes sprinters land during the acceleration phase and even something as simple as how to properly get out of a pushup-start. I’ve never sat through a presentation on running as thorough as Andersson’s. Even when the form wasn’t “optimal”, DeWeese explained what was wrong and by showing it multiple times, it allowed me to see the mistake as well. DeWeese’s presentation was on more than sprinting, but that’s just what left the biggest impact on me.

Once the weekend wrapped up and I had a few days to sit and reflect on it, I was glad I was finally able to make the trek down to Richmond. I think before writing these because I don’t have the coaching experience to fully give these coaches and presentations justice. I’m only at the point where I can take away small little chunks from each talk. But, the ultimate takeaway is I’m exposed to the extensive amount of information that’s out there and given another reminder of how much I don’t know. What this does is make me better in steps. Even though I don’t grasp everything, the seed is planted and begin to do a little more research. The terminology isn’t foreign to me anymore and I start to understand it better. This allows me to have an even greater appreciation for the information being shared when I hear it in the future and, in turn, become an even smarter coach.