There’s a lot that goes into running a successful facility. As an outsider, all you see is the beautiful facility, the turf, state-of-the art equipment, jerseys mounted on the wall and the college and pro athletes walking through the doors.

There was a time, early on when I was starting, where that was all that I saw, as well. But, through hearing different coaches at the collegiate and pro level and those who ran top-of-the-line facilities in the private sector, I learned that a lot more goes into it than you think.  Owners need to wear many hats to keep the place running smoothly and there’s a lot of 12-to-16 hour work days.

I never doubted what these coaches said. But, like with anything else, you can’t fully understand what they are saying until you experience it firsthand. Back in February, I had my “welcome to the big leagues” moment. This moment lasted a week and it was a chance for me to be surrounded by some of the best coaches this industry has to offer.  Four of those days were spent observing and getting into the trenches during the most hectic time of the year — NFL Combine preparation — and another at the elitefts Sports Performance Summit at Ohio State University.

The first four days were spent with Justin Kavanaugh at the Sport and Speed Institute (SSI) in Chantilly, VA. This was my second trip to SSI for the NFL Combine prep. Last year, everything was new to me and I sat back and observed the combine training. Combine training alone is a long day and this year I got to see that it was only part of a day in the life of Coach Kav. This year’s trip included the Nike Coach of the Year Clinic, 7-on-7 team practice, a mock pro day and food shopping for the future pro’s.

After heading home for a few days for grad classes and to train clients, it was off to Columbus, OH for the elitefts event. There, I got listen to three NFL strength coaches in Buddy Morris (Arizona Cardinals), Justus Galac (New York Jets) and Mark Uyeyama (Minnesota Vikings) speak, as well as Dr. Ken Kinakin and Dr. Eric Serrano speak on muscle testing and nutrition. I wrote about the event for elitefts.com and that article can be found HERE. 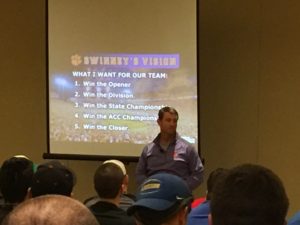 Dabo Swinney, fresh off a National Championship with Clemson, speaking at the Nike Coach of the Year clinic.

Right after school ended Friday, I got in my car and made the trip down to Virginia. I got there late at night and was told I needed to be up early because Kav was speaking at 8 a.m. He was the only strength coach speaking there out of a lineup that featured some of college football’s best coaches like Dabo Swinney (Clemson), Dave Cutcliffe (Duke), Gary Patterson (TCU), Larry Fedora (UNC), Kirby Smart (Georgia) and Jeff Brohm (Purdue).

Kav discussed ways to develop speed in the weight room. Since the audience was high school football coaches and not trainers, Justin tailored the message properly so it stuck. From the outside, the presentation looked pretty basic. But, he went into areas of speed development that are not talked about at the basic level — like the importance of the hip, back, ankle and foot — and gave simple drills that could be implemented immediately. I didn’t take any notes, but remembered most of what he said, even on little sleep, because of the way he presented it. These coaches have so many other things to worry about and don’t have the time to delve into exercise science.

After the presentation, it was back to SSI to check on the gym and see Josh Schroeder and Allen Africa working with the groups on a busy Saturday morning. Even though it was combine season, SSI still caters to over 200 youth, high school and collegiate athletes. They don’t get neglected when the future pro’s are in town. Once the morning sessions were completed, there was some time to talk shop and then it was back to the Nike Clinic until the night.

The Combine guys had Sunday off, so we were back at the Nike Clinic where Justin interacted with different coaches about a variety of things. Some wanted to talk more about his presentation. Others wanted to talk Xs and Os and about football. He’s the leader in the area for football training for a reason. Later that day, Coach Kav shifted from performance coach to football coach. It was an unusually warm February afternoon, so we went down to Hayfield High School where he and his staff held practice outdoors for their 7-on-7 team.

After the 7-on-7’s wrapped up, Kav then shifted into caretaker mode. The players are given customized meal plans catered by Ed Mays and EatSimpleGrill,  which still ranks as the best meal delivery service I’ve ever had. But, football players do require a lot food, and he gets them some extra steaks, chicken, water and household items with his right-hand man Austin Givens, who is the director of SSIs Combine Program. While possibly the most insignificant thing I saw in terms of training, this stuck out to me the most. Both Justin and Austin have loaded schedules. Austin, outside of all the planning and logistics he does for this program, also runs a gym and Kav has a lot on his plate with the coaching and talking to agents, among other things. Despite all of that, they still had to do the minuscule tasks and they made sure to get everything so their athletes are comfortable. That meant a lot to see.

Finally, on Monday it was time for the mock pro day. The guys went to Centerville High School to do the field drills and positional drills. One thing I learned from the coaches is about having a quick trigger finger on the timer. I always knew hand time was not as accurate as an electric timer, that’s obvious. But these guys were able to stop and start the watch in .03 seconds. When I tried, I was anywhere from .14-.2. That makes a huge difference during assessments.

We then headed back to SSI where I got to speak to the guys about talking to the media. I explained 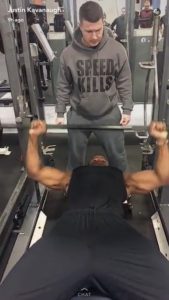 a couple misconceptions athletes and fans have about the media and why they ask certain questions. I then discussed some strategies on how to develop a good relationship with media members and how to be accessible. Next, was the 225-bench press test and I was caught off-guard when Kav told me to step and start spotting these guys. One thing I’ve seen from these athletes through watching them workout and go through the drills is the level of effort they give. You hear the term “100% effort”, “no quit” and things of that nature thrown around, but these guys showed it. You could hear the grunts and the impact of the foot striking the turf during each cut. On the bench press test, they literally went until the tank went empty. This is what giving your all looked like. The competition could be felt and the support they all had for each other made for an awesome environment. It was pretty cool to be spotting an athlete while all his “teammates” were huddled around yelling and pushing him. It was the type of environment I dreamed of being in. It was an awesome way to close out the trip. 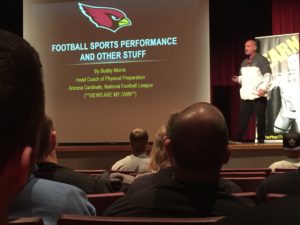 A few days later, I was at Ohio State with Kav for the Sports Performance Summit. Since I already wrote about it, I won’t go on too much about it. But, it was the perfect venue to hold this type of event. You pass the Woody Hayes Athletic Center on the drive over and see The Horseshoe as your walking into the Fawcett Center, where the seminar took place. Plus, your surrounded by all these high level coaches, even those in attendance. There were other NFL and collegiate strength coaches in attendance. I got to hear Morris speak about the importance of recovery, Galac outline the entire program he uses with the Jets and Uyeyama discuss thinking “big picture” and not getting caught up in the dogma of training.

It was also great hearing Dr. Kinakin and Dr. Serrano speak, who I both knew from attending the SWIS Symposium. These guys didn’t have the title of working with an NFL team, but you could clearly see their presentations resonated with the crowd. Dr. Kinakin broke down simple ways to perform muscle tests and quick fixes for some of the dysfunctions you will encounter. Dr. Serrano broke down nutrition and how to plan for the different types of athletes you will encounter. His nutrition presentation is on YouTube and I send it to clients who are looking for more information on the topic.

When I left Ohio Saturday night, I was exhausted, but feeling good. It was a long, but productive week. It gave me better insight into what it takes to run my own facility. It didn’t turn me away from the idea of running my own place. It just showed me that it’s going to take a lot of work. Even as an observer the days were long and I didn’t sleep much, but I also woke up the next day eager and ready to see what the day would bring. It was a great experience to be a part of.