The Speed and Power Summit has the Right “Culture” 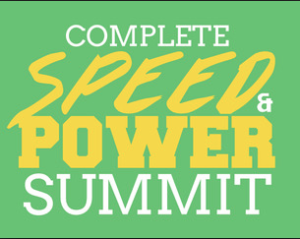 The first word that comes to mind when thinking about the Speed and Power Summit is ‘culture’.  Nearly every conference I attend has at least one presentation centered around culture. While I’ve heard it discussed from different people, all of the discussions have common themes. If I was to take all of those themes and give you a visual representation through a seminar, I’d give you the Speed and Power Summit.

If there was a culture discussion centered around conferences, the Speed and Power Summit would check all of the boxes. What I’ve seen through attending the New Jersey event at Reach Your Potential Training the past three years is how Athletes Acceleration has developed a community of coaches with these events. Pat Beith and Alison Culley have done such an outstanding job growing this event to what it is today and developing an atmosphere that is welcoming with egos checked at the door. 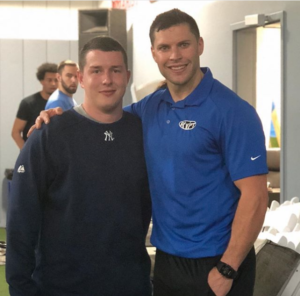 Bobby Smith has given me a ton of information that I’ve used in my training.

The speaker lineup of Speed and Power Summit veterans Lee Taft, Adam Feit, Bobby Smith, Wil Fleming andRobert Dos Remedios and heavy-hitters Joe DeFranco and Boo Schexnayder embodies what this summit is about. These are some of the best coaches in the field and are also solid people. They are willing to engage in a full conversation with you and are always willing to help. A lot of people preach that in this industry, but these guys actually follow through.

I go to the Speed and Power Summit with different expectations than I do with other seminars. On top of the information I learn, I go there looking to reconnect with coaches I’ve met at previous events and always leave meeting someone new. I go there to catch up with all of the presenters, who know you by name and ask how you are doing. These guys remember things that I told them from a year ago and ask me about the progress I’ve made. Alison always makes sure to say hello and that’s just one example of the individual treatment you don’t get at a lot of other events.

Some of my best seminar social event experiences have come here. This year I was fortunate to spend most of my time in a small group listening to Lee Taft and Justin Kavanaugh talk about speed. This was one of those times where I just sat back and listened. Hearing Lee talk about how he video records everything and Justin talk about Lee’s coaching eye gave me insight into Lee’s process and made his presentation on how to train the core for speed training that much better. It gave me a better understanding of what he was seeing when he showed video examples. The exercises he showed to train the core specifically for speed and change of direction were things I’ve never seen before.

It was great to catch up with Joe DeFranco and take part in his hands-on with the prowler. Joe has played a bigger role than he knows in my development as a coach and his recommendation to attend the SWIS Symposium in 2015 was what got me started in seeking out and attending all of these seminars. The prowler has become a big part in my training with my high school athletes and it was pretty cool to have him coach me up on my sprints and prowler work.

Adam Feit and Bobby Smith are two others who have been nothing but helpful to me. Adam’s presentation on leadership resonated with me because he’s such a good presenter and I knew where the message was coming from. When you hear so many presentations on character, culture and leadership, they can go stale either because the message shares nothing new or you know the presenter doesn’t have the character that matches his power point. Adam is a pro who commands the stage and his presentation was one of the few I’ve heard on the topic that actually made me question myself and what I could do better. You know it’s going to be good when his name is on the speaking roster.

Bobby is the same way. He’s one of the few coaches who is willing to share everything he knows. He wants to pass on everything he’s found that works, so we can use it in our coaching. Having used so much of his materials on my own athletes, it was great to be coached up by him during the hands-on and taken through all of the progressions. My demos could use some work and it was nice to get some practice under his eye. His products have helped expand my coaching and have given me the tools to be able to teach speed and agility better and progress my athletes, especially the younger ones I train, better. He’s always given me time when I come up to him and it was great to catch up with him and thank him for what he’s done for me. 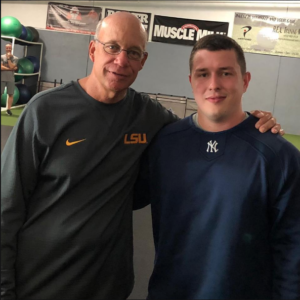 Boo Schexnayder said he would have no problem taking a picture with a Yankees fan.

This year’s summit was the first time I got to hear Boo Schexnayder present and he delivered a home run on speed development. He thoroughly broke down how he trained speed and gave us his template and how he mapped out the training week. Speed training is an area I’m always looking to improve and he delved into how he sets up the stance during his hands-on. This was more of a “thinking” hands-on as he gave some of the ways he assesses runners and showed us how we could use the wall to help teach our athletes to run properly. His tip on only focusing on one side of the body was something I never heard before. He also told me he’s a big Yankees fan, which makes him an even better coach.

Going to the Speed and Power Summit the past couple of years has really gotten me interested in the Olympic lifts. I’ve been fascinated with how to progress these and incorporate them in my training. Thankfully, I was able to learn from one of the best in Wil Fleming. His products have helped me understand them a lot better, but nothing topped getting to take part in his hands-on with the snatch. I’ve never done snatches before and I left the hands-on feeling pretty comfortable about doing them. There’s obviously more work that needs to be done, but his hands-on was good. I was able to go through each progression of the lift and do it all under his professional eye. I’ve always enjoyed his presentations and his hands-on was one of the highlights for me. It was one of the main things I was looking forward to doing.

Coach Dos’ hands-on, while tiring, always give me things I can use with athletes, as well as my general population clients. The space he works with is slightly bigger than what I have at the gym I work with, but it gives me ideas on different things I could implement for speed and conditioning work. I like his presentations because I work with a wide range of people and the things I take away from listening to him can be applied with all different groups of people. All of his stuff is also done with the idea of developing either speed, power, conditioning or a mixture of the three and its purpose is to give any client you work with the tools to not only get into better shape, but to be a better athlete.

The Speed and Power Summit has become my unofficial start to the summer. The past two years it’s fallen on the weekend before my last week of grad school, so I usually come in on Saturday pretty groggy. But, through all of the interactions I have with the speakers and attendees, the social and all of the information I learn from the presentations and hands-on, I always leave this event ready to attack my summer training. There’s few places that match the atmosphere the Speed and Power Summit has created.