A Night in the City at the Pro Coaches Clinic

Anthony Renna admitted during his opening that he had some trepidation about the timing of the Pro Coaches Clinic. And that’s understandable. It’s hard to gage how many people would attend an event on a weeknight in the city just a couple of days before Christmas.

However, attendance isn’t that big of an issue when you have four of the top hockey strength and conditioning coaches presenting at a seminar organized by the best in this industry. There was a standing-room only crowd at Body Space Fitness in New York City to listen and learn from Mike Boyle, Reg Grant, Mark Fitzgerald and Devan McConnell.

Cameron Josse, the director of sports performance at DeFranco’s Gym, also presented on the 1080 Sprint. As someone who has followed Cameron and Joe DeFranco for a long time, I know that the 1080 Sprint has been beneficial in the training of his athletes and it was interesting to hear him explain how it worked in person. After the presentations, there was the added bonus of a Q & A where the attendees were able to ask the presenters some questions.

This was the first event Renna organized and I think it was huge success. I’ve listened to his The Strength Coach Podcast and Stop & Give Me 20 Podcast and knew this event would be a good one with him helping set it up. They gave away a ton of free stuff and I came away with Boyle’s “Advances in Functional Training” book and a free month membership to StrengthCoach.com.  From going to a lot of these seminars and seeing the organizers work during them, I’ve seen that it takes a lot to put these together, including a lot of stuff behind the scenes. He said they would like to do this again and, after attending this event, I certainly hope they do so. 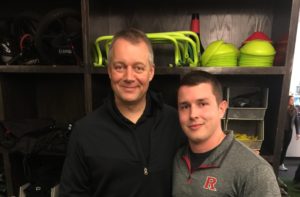 Me with New York Rangers strength and conditioning coach Reg Grant. He took the time to talk to me after his presentation about training the Rangers and some tips to help with me with the youth hockey players I train.

This event also had an interesting back story. Grant, the New York Rangers strength and conditioning coach, told everyone that this seminar was part of an idea he and other coaches tossed around for a while. Since the NHL season is so long, strength coaches in the league only have a small window where they can attend seminars. Grant and the other coaches he’s talked to wanted to create another avenue for coaches to meet and share information with each other. Even those who hold the most coveted positions in the field are eager to learn as much as I am.

Through the presentations, I also learned that even strength coaches at the collegiate and professional level have to adapt and overcome issues that we all face. They aren’t just given a blank check and access to million-dollar facilities, like we might think. There was a lot learned from the presentations, but, there were three main points I took away: know your purpose, don’t overthink things and adapt. 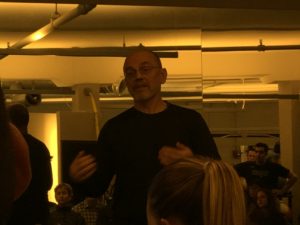 Mike Boyle talked about the proper way to program conditioning for athletes.

Knowing your purpose has two meanings: knowing why you’re in this business and the purpose behind every exercise in your program. First, as Reg illustrated in his presentation, you need to figure out why you’re there before you get concerned with the athlete’s motivation. He said this is a “labor of love” and you can’t be in this profession if your sole objective is to be a millionaire. You need to be confident in what you are prescribing to your athletes. Knowing your purpose also involves knowing the group you are working with. Reg didn’t walk into the Rangers weight room and push his ideas on the players. Instead, he looked at the veterans, saw what they were doing and asked them what worked for them and built off of that.

“A combination of interval training and common sense.”

-Mike Boyle on how he programs conditioning for his athletes.

When you’re working with athletes, your job is to help develop the physical tools they need to succeed at their sport. Boyle, owner of Mike Boyle’s Strength & Conditioning facility and one of the most recognized coaches in the world, went into this during his presentation on conditioning. We need to ask three questions: why am I doing this? How am I doing this? What am I doing? Boyle said our job is to “fill the empty buckets” in our athletes training and not pour more water into the ones that are already full. You are not suppose to fill the buckets with what you like to do, but select the right stuff to put into each bucket. He comes to these conclusions by watching a game and watching the best players.

Once you have the program in place, you need to be able to monitor the performance of your athletes. McConnell, the head hockey performance coach at UMass Lowell, discussed some of the forms of technology coaches use to gage performance, as well as the the types of ways he monitors things on the front end and back end with his team. Not only is he measuring performance, but also the players readiness before a session. You need to figure out what and why you want to measure certain things and build from there. 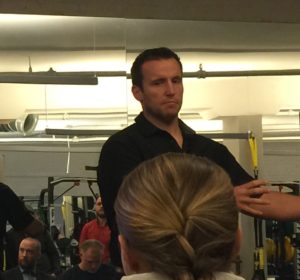 Mark Fitzgerald talked about recovery and the methods he uses with the Anaheim Ducks.

This takes me to my next takeaway, which is not to overthink things. Fitzgerald, the Anaheim Ducks strength and conditioning coach, said we should be chasing simplicity, not complexity. He believes less is more when it comes to training his team during the season. Since they are training after games, he focuses on the main points he wants to address and does it in the most efficient way possible.

Boyle’s presentation style was about making the information easy to digest. He even said in the beginning he wasn’t going to use all the terminology used to describe the different energy system. I’m paraphrasing, but he said if you can’t explain it in simple terms, then you don’t really understand what you are talking about. He actually brought up a story where a scientist came to his facility and said he was doing things wrong. That was something I never expected to hear. But, Boyle was focused on training his athletes to be the best in their sport and not the best weightlifters. He saw what worked for the best players and stuck by it. 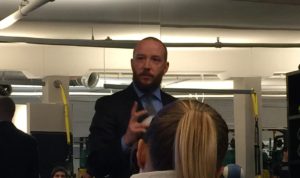 McConnell discussed the monitoring systems he uses with his team.

data, but it was the opposite. What I loved about his presentation was how he kept it simple and showed us how we could monitor without the most expensive equipment. He told us that he doesn’t have access to all of the highest-priced data trackers out there and gave us the alternatives he uses. In fact, for each thing he discussed, he gave us a cheaper alternative that could be just as effective. He showed that you can track data in many ways without spending thousands of dollars.

Even though you’re training pro athletes, you can’t expect everything to go perfectly. There will be times that they don’t do everything asked, like recovery. In times like that, Fitzgerald talked about embracing the small victories. When you notice that they don’t look right before a workout, you need to change things up and not stick to what’s on the sheet because they might not be ready for it. He discussed how he hydrated his players before after flights and how he had to serve as the team’s nutritionist. I was surprised to hear that. But, he focuses on the basics and does what he has to do to keep his athletes ready.

Just because they coach the pros, it doesn’t mean they have everything. Grant talked about learning to be efficient with the space you have. Even though he works in New York and at Madison Square Garden, the Rangers don’t have an enormous, state-of-the-art weight room like you see at other places. The visitors training area at arenas is even more sparse. I was shocked because I figured this was only a problem I had to deal with by working at a commercial gym with other members using equipment.

If the pros still have to find ways to adapt, I certainly have no excuse.

This is just three common themes I found from all of the presentations. There was a lot more discussed, but, if I was to detail everything I wrote down, this post would become a mini novel. Instead of diving into all of the details of their presentation, I wanted to focus on those three points because I believe they are points any coach could relate to. When I saw this lineup, I didn’t expect these high-level coaches to discuss issues that related to my situation.