Found a Gem with the PLAE Summit 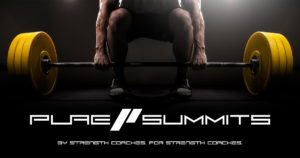 I was browsing Instragram in early March and stumbled upon a post by Brett Bartholomew, who spoke at a PLAE Summit in Indiana. I saw he was a part of a great group of speakers and decided to investigate more.

Turns out, there was one in Baltimore.

My next trip was planned and I’m glad I found out about it in time. This was such a well-run event by Ron McKeefrey and his crew at PLAE. Ron, who I’ve followed for a while through his “Iron Game Chalk Talk”  podcast and CEO Strength Coach book, did such a great job organizing this event. He was always on the move to make sure everything ran smoothly and on-time and he deserves credit for that. 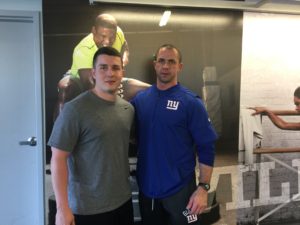 Also, what made this seminar unique from the other ones I attended was there was a 40-minute group discussion. The audience was broken up into small groups and we had to discuss our “biggest pain point”. I got to talk about and receive feedback on how to deal with my biggest struggles as a trainer from a group that consisted of gym owners, college and high school strength coaches and performance coaches. Each member gave me detailed feedback in what was basically a free consultation.

Fitzgerald, the Houston Texans strength and conditioning coach, started the day and drove home the importance of simplicity. With so much out there, it’s easy to want to go out and try the new, fancy training method out there. I’ve certainly been guilty of that. To elaborate on the quote above, your athletes have to be able to do what you’re asking of them before you can progress them. The fundamentals never get old and they set the foundation for everything.

It’s presentations like this one that make me respect these coaches so much more. Fitzgerald went into how he maximizes the four pillars of training — mobility, speed, strength and conditioning — for his athletes, but did it in a simple, practical way where anyone could understand it. Conditioning is an area I’ve been trying to learn more about and I found it interesting  how he periodizes his conditioning work, similar to how you would for strength training. Also, even though he works with top-level athletes, he stressed the goal is quality over survival and that hearing his athletes say “hell yeah” about conditioning work beats “hell no”.

“You’re training as soon as you walk into the weight room.” -Rick Court

Court took the stage next and I felt like I was getting an inside look at him coaching in the Maryland weight room. I was just so impressed and motivated to see his attention to detail on coaching. To Court, everything done in the weight room is considered training. He doesn’t label parts of the session the warm up, main lift or auxiliary lifts because the athletes will perceive them differently. He wants his athletes to get the maximal effect out of every drill. When he had Antonio Turner, the assistant strength and conditioning coach for football, go through the warmup ladder drills, Turner had to finish each drill with a power step out of the ladder.

He then took us over to the power rack and showed how he coached and cued some lifts. Everything was exact and the emphasis was on making sure his athletes were strength training and not just flinging weights aimlessly.  I love watching how the best in this industry coach up their athletes and Court gave everyone a small snapshot into the art of coaching. He didn’t even have to present anything. He could have just brought a few athletes in and trained them and that would have been more than enough for me.

“Success is not an accident. You get what you earn.” – Zach Even-Esh

The quote above perfectly sums up Even-Esh’s presentation. Zach’s presentation was different because it wasn’t so much about the technical aspects of strength training. You get what you put into this business and it’s all about making your athletes better. He literally built his business from nothing and his love of training radiated through his speech. He started off as a teacher and trained athletes part-time out of his car at local parks. He then moved his “gym” to his house and told a funny story about how his neighbors would look on in disbelief at all the unconventional exercises he would have his athletes doing in his backyard. Despite it all, he kept plugging away and wound up building three gyms and has worked with the Rutgers and Lehigh wrestling teams.

It was a great presentation to hear for two reasons. I’ve known about Zach for a long time because he trained a lot of the athletes I covered as a sports writer and I had a chance to visit his Edison gym. Also, it hit home because his situation in the beginning is similar to mine. Right now, I’m training part-time in addition to my school job and grad school.

“The system has evolved over 20 years. I reserve the right to change my views.”

Wellman’s presentation was a nice blend of developing as a coach, weight room culture and training philosophy. Wellman, who’s been a Division I strength coach for 20 years before working for the New York Giants, talked about how he is still searching for more and broke down the four developmental stages of a strength coach: informational accumulation, settling in, epiphany/revelation and mastery. First, the little information you have creates a blissful ignorance and then you settle in with the knowledge you have and continue to grow at your own pace. That leads to the epiphany stage, where you realize how little you know and answer questions with “maybe” or “depends”.  You realize there’s so much more out there and he said he’s perpetually in this stage. You never really reach the mastery stage. I’ve been in that first stage and through seeking out more, saw that I don’t know much.

He then discussed culture and that it determines your success or lack of it. Leaders design and create an environment and “you get what you emphasize or what you tolerate.” This applies to the private sector as well because if I allow sloppy reps and clients to show up late, it’s going to become the norm. Wellman also gave us some insight into his training philosophy and I liked how he said he only programs one-to-two weeks at a time because it allows for corrections of errors, omissions and the unforeseen. There’s more to it and this is just a snapshot of the presentation. 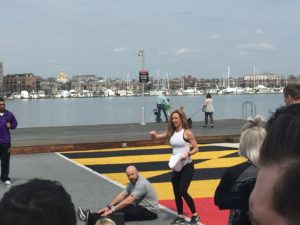 Next, the summit shifted outside to Under Armour’s outdoor turf field and I got to take part in Santas’ hands-on lecture. As someone who wants to train more baseball players, I was particularly interested in her presentation since she is the mobility coach for the Atlanta Braves, Toronto Blue Jays, Philadelphia Phillies, Tampa Bay Rays. She showed how she uses diaphragmatic breathing to help open up the shoulder, thoracic spine and hip. Not only are these are three important areas for baseball players, but for anybody.

I was able to see an immediate increase in range of motion performing these three movements. I had a pinch in my hip when I did the pre-test and it was gone moments later. These are three areas I need more work in and incorporated all three movements into my routine. What I liked about them was they were simple to pick up, the results could be seen quickly and they are easy to implement.

“You have to know your why, then you’ll be fine.” – Joe Connolly

The day closed with an information-packed presentation by Connolly. There was a lot to take away, but I’m going to focus on his discussion on training new athletes and the Olympic lifts. Joe talked about the importance of “slow cooking” his new athletes. For some of them, it’s their first time really lifting weights and you have to teach them slowly to build that foundation. Your athletes dictate your program, not the other way around. You can’t train your freshman the same way you train your seniors. You have to make sure your athletes see things the way you do, so they understand what they are doing.

Connolly has an Olympic lifting background and has all his athletes perform the lifts. This was interesting to me because you hear much about the Olympic lifts, since some coaches view them negatively. But, this goes back to knowing your why behind your philosophy.  He gave a thorough breakdown of his progression scheme for each Olympic lift and why he has been able to incorporate them safely and efficiently. I’ve wanted to learn more about the Olympic lifts and Joe kindly spent some time after his talk telling me about all the available avenues to learn more.

Overall, this was a fantastic event. I didn’t get much sleep the night before, but was wide awake the second I walked into the Under Armour facility and heard the speakers. These events have a way of lighting a fire under me and keeping me positive. You know it’s a good event when you walk out the door on four hours of sleep wanting to get after it and train some athletes.

This event was also special because it was the first time I left with some CEU credits towards my CSCS.