The Complete Speed and Power Summit Lives up to its name 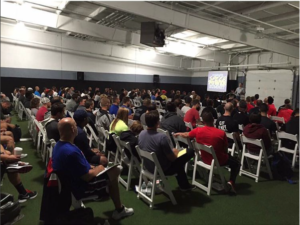 The Complete Speed and Power Summit was held at Reach Your Potential Training in Tinton Falls, NJ on Sept. 24-25

My goal is to be the go-to trainer in the area for athletes of all ages. I’m obsessed with trying to reach that goal and spend most of my free time learning about speed and power training.

Every athlete wants to know how they can get faster and more explosive and I’m always trying to figure out the best way to get it done. I still have a lot to learn about those two topics, so when I heard Athletes Acceleration was holding it’s Complete Speed and Power Summit nearby in New Jersey, it was a no-brainer for me to attend.

I came away with far more than I expected and definitely left a better coach. Before I walked into the Reach Your Potential Training (RYPT) facility in Tinton Falls for the event, my knowledge of the subjects was about average. When I left, I had a list of unconventional exercises I’ve never seen before, simple ways to incorporate reactive speed training into my program, speed games to use with my younger athletes and ways to improve acceleration. That would have been more than enough, but I also learned a top-to-bottom template on jump training and speed.

I knew the weekend was going to be a good one the second I walked into RYPT. The pictures I saw of the place before going didn’t do it justice. I could tell this was a place where serious athletes came to train and receive top-of-the-line coaching. Before I entered the gym, I saw the beautiful Elite Sports Physical Therapy center next door. Then, I walked in and was greeted with a 16,000 square-foot facility that has a three-lane, 60-yard turf area, another multi-purpose turf area, five Olympic platforms and seven power racks. There’s every sort of barbell imaginable, sleds, loads of TRX straps, dumbbells up to 100 pounds, kettle bells up to 44 kgs, plyo boxes and a variety of other tools. Basically, this was a Toys-R-Us for strength coaches. Add in the logos of all the colleges that its athletes attended and you get a first-class facility. 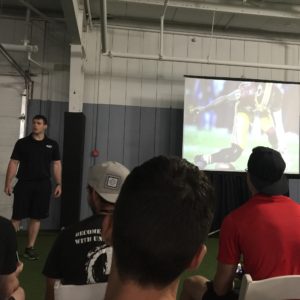 Adam Feit, the Director of Sports Performance at RYPT, talking about jump training.

As impressive as the facility looked, I was even more impressed by the quality of its coaches. Bobby Smith, the owner and founder, and Adam Feit, the Director of Sports Performance, both spoke at the summit and gave two of the best presentations I’ve ever seen. They held nothing back and took us behind the curtain to show how they program at RYPT.

I had a basic understanding of programming jump training, but Feit literally showed me how to put together a solid jump program step-by-step. He gave us all a 12-week outline and how to make adjustments based on how many days of the week the athlete is training and what the athlete’s training age is. The biggest takeaway was how he showed how to use Prelepin’s chart with jumps. The same way you’d use percentages to program the main lifts could be used to determine the reps of certain jumps, based on difficulty level.

Smith, who was the last presenter of the summit, ended it with a bang by giving a fully-detailed look at how they teach speed. He actually gave too much to where I needed to review the slides when I got home because it was jam-packed with so much information. What stood out the most to me was when he talked about max velocity training. That’s an area I haven’t learned too much about, but he broke down their progression scheme and I left the summit ready to work. 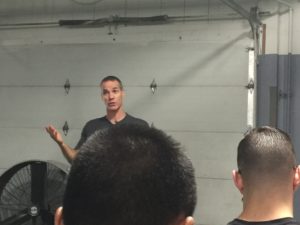 Lee Taft, during his presentation on “General to Specific Speed”.

Speaking of speed, I got to listen to “The Godfather of Speed” Lee Taft. Agility training is about getting an athlete to react to an “unknown” and can’t be duplicated with a rehearsed, pre-planned drill. Lee talked about how the body recognizes patterns and if we can feed the mind enough of these “experiences”, our athletes will be able to be a step ahead on the field. We can prepare our athletes for this by giving them competitive situations that require them to react. He then showed us a tier system and a bunch of different upper or lower body drills he used with a basketball team. He made it really simple and easy to digest. 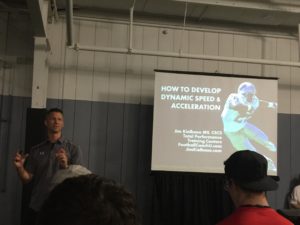 Jim Kielbaso, whose trained athletes for the Olympics and all four major sports, focused a little bit more on the scientific side of sprinting when he discussed acceleration training. He apologized for getting too much into the science, but I always enjoy those types of presentations. I really enjoy hearing those in the top of the field really dive into and break down a topic. Jim focused on the mechanics of the 10-yard sprint and the importance of creating horizontal force. He gave a nice piece of information on how the percentage of body weight used for sled sprints trains different aspects of the sprint (15-20% for acceleration speed, 45-50% for improving horizontal force). I really enjoyed this presentation and all the studies he showed.

Since I train a group of 7-8 year-old hockey players, I was very interested to hear Dave Gleason’s presentation, which focused on training youth athletes. The biggest thing I took away from his presentation weren’t drills, but a thought. Dave said, “we can’t take their fitness away from them.” When these kids are in their 40s, are they going to look back and see that we didn’t give them what we needed. Because of his presentation, I look at a kid I train and picture that he will be a client of mine for the next 10-20 years. I don’t view it that I’ll just be training them for a couple of weeks or months. It’s my job to set them up for the future and, by having them so young, I can develop them so that they can reach their full potential when they get older.

A large portion of my clientele is general population, so it was great to learn ways to incorporate power training into their program from Robert Dos Remedios. Coach Dos showed ways to modify power movements for special populations. It doesn’t matter what modifications are needed, it’s all about intent. The most important factor is the intent needs to be to move as fast as possible. He also discussed “power endurance” and building work capacity, all while showing a bunch of outside-the-box power exercises.

Overall, this was a fantastic trip and Pat Beith did an outstanding job putting it all together. I left the summit with far more than I could have asked for. Each presentation and hands-on portion brought something different to the table and I came away with multiple things I could implement immediately from each presentation.